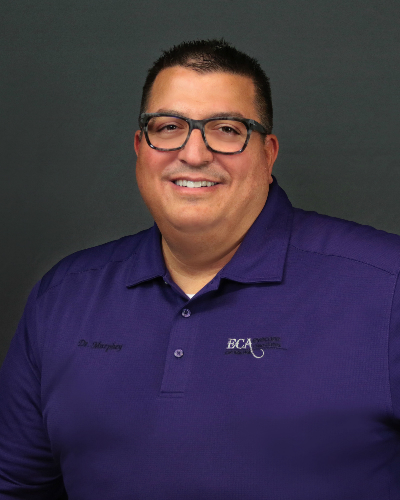 Dr. Murphey grew up in Clay Center, Kansas. He joined the United States Army after graduating from Clay Center Community High School in the spring of 1988. After serving his country and being honorably discharged, he began his college career at Kansas State University in the fall of 1990.

After his first semester he was recalled to active duty to serve during Operation Desert Storm in 1991, but still managed to graduate in the spring of 1994 with a Bachelor of Science in Biology from Kansas State University.  He then attended the University of Houston, College of Optometry in the fall of 1994 and received is Doctorate in Optometry in the spring 1998.  Dr. Murphey practiced in the Wichita area for 3 years. before he moved to Salina in late 2000 to join Dr. Lewerenz and Dr. Welsh.

Dr. Murphey is a member of the American Optometric Association, The Kansas Optometric Association, the Heart of America Contact Lens Association, is Board Certified by the American Board of Optometry, and is a life member of AMBUC’s.  He enjoys spending time with his wife, Janell, and his two sons, Logan and Ryan. He also enjoys cheering for the local sports teams including the Wildcats, Chiefs, and Royals, playing cards, playing pool, cooking, grilling and smoking, watching movies and spending time with friends and family.