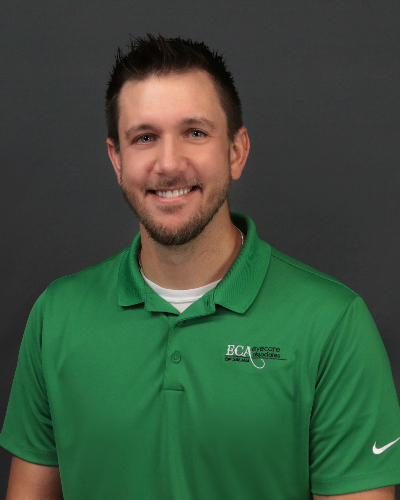 Born and raised in Salina, KS, Dr. Brandon Smith graduated from Salina South High School. He received his undergraduate degree in cellular/molecular biology from Fort Hays University. While in school, he participated in numerous extracurricular activities including the Tiger baseball team and a worship band leader for Christian Challenge.

He received his doctorate from the University of Houston College of Optometry in 2011. While attending optometry school, Dr. Smith was involved with several organizations, including Fellowship of Christian Optometrists, where he served as the chapter’s President. He also traveled to rural Kenya in 2009 and spent seven days providing medical eye care to over one thousand patients in need.

Throughout his education, Dr Smith has received several letters of clinical excellence, become a member of the Beta Sigma Kappa Optometric Honor Society, and was inducted into the Gold Key Honor Society for outstanding academic performance and leadership ability.

Since graduation, Dr. Smith has become licensed as a therapeutic optometric glaucoma specialist in both Texas and Kansas, and is active in his local city and state associations. His specialties include ocular disease, including glaucoma, cataracts, and age related macular degeneration, as well as fitting specialty contact lenses.

When not in the office, Dr. Smith enjoys singing and playing guitar at church on Sundays or in the local band, The Blades. He also enjoys snowboarding in Colorado and being in the company of friends and family. He and his wife, Erin welcomed their son, Samuel, into their family in 2016 and their son, Oliver, in 2018. You may also see him out and about playing with his dogs, Maddy and Shiner.